The downtown landscape can change quickly in Madison. It was a little more than two years ago (April 21, 2013) that the Wisconsin State Journal reported on “the most ambitious mixed-use project ever on State Street.” Today, The Hub is ready for occupancy at State and Frances Streets.

The University Inn, demolished in November of 2013, occupied the site for nearly 60 years, opening as the Town/Campus Motel in 1957. The word “motel” is important. After World War II the downtown hotel was being eclipsed by the roadside motel and by 1951, “motels had surpassed hotels as the leading suppliers of rooms” for U.S. travelers, writes John Margolies in “Home Away From Home.”

The Town/Campus Motel is more correctly classified as a motor inn, a building of two or three stories distinct from the usually one-story motel. Motor inns often were built near freeways, airports and other heavily traveled corridors in metropolitan areas, though they quickly rose in or near downtowns, too. 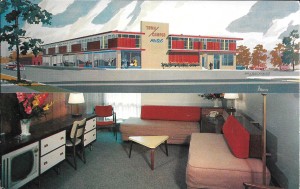 The motel sported contemporary design inside and outside. The rendering on this postcard view shows a two-story motel though it appears that there were three floors from its beginning.

An ad in the 1957 telephone directory proclaimed the Town/Campus Motel as “Madison’s Newest and Most LUXURIOUS Accommodations.” It enjoyed a great location between the UW campus and the state capitol, had adjacent free parking, and “telephone and free TV in every room.” Early occupants of the State Street commercial spaces included a Toddle House Restaurant, a national chain with 24-hour service.

The new Hub on Campus Madison (the full name of the building) will have at least five restaurants at street level and high-end amenities for those sleeping in its nearly 1,000 beds. In 1967 the Town/Campus Motel advertised 46 rooms. So while the numbers have grown exponentially in 50 years, it’s still about heads and beds.