“The queen of Madison’s hostelries, the Park Hotel, is dead.”

So wrote Frank Custer in The Capital Times on Aug. 5, 1961, when he detailed the demolition of the old Park Hotel to make way for the building that stands today at 22 S. Carroll St.

Throughout its 144-year history, the hotel has been renovated and revived several times. As reporter and historian Custer wrote, “The hotel was like a stately old dowager who had undergone a number of face liftings in her time.”

The Park Hotel opened on the Capitol Square in August of 1871. Its creation was a direct response to threats from Milwaukee legislators to move the seat of government from Madison due, in part, to a lack of first-class hotel facilities.  A group of Madison investors engaged Stephen Vaughn Shipman, who also designed the capitol dome (see the November newsletter), to create a four-story building with a stylish Mansard roof, 118 sleeping rooms, parlors, a ballroom and (notably) indoor plumbing. 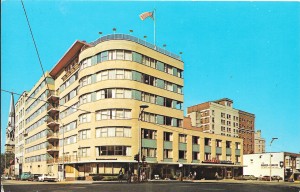 The hotel quickly became the most fashionable in the city and a favorite haunt of legislators and lobbyists. The Park Hotel made it through two national economic depressions before expanding in 1912 with an updated façade that was more classical than Victorian.

By 1961, “She had the ailments of age,” Custer wrote, and the old Park Hotel was demolished to make way for the Park Motor Hotel, a name directed at automobile travelers attracted by convenient parking.

The new owners engaged architect Russell Barr Williamson. When he was just out of college Williamson spent about four years in the office of Frank Lloyd Wright before setting up his own office in Milwaukee in 1920. Williamson became known for his contemporary house designs and had several hotel projects late in his career. 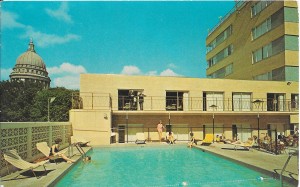 Even the new Park Motor Hotel was not to be left alone. It was expanded at least twice, not always in felicitous ways. The “cap” on the top floor is one of the additions that will disappear by next summer. With the renovations now underway to the Inn on the Park—and the revival of the Park Hotel name—it might be time to amend Custer’s statement to, “The queen is dead. Long live the queen!”