Cast iron was a popular building material in the last half of the 19th century. It was inexpensive and could be easily molded or cast into almost any shape, often imitating carved stone. Aesthetically, many contemporary critics dismissed cast iron as vulgar and unrefined.

Cast iron has drawbacks, too; it rusts easily and can be brittle. Nonetheless, it was employed widely. The largest concentration of architectural cast iron in the world is in New York City where many buildings in the SoHo Cast Iron District sport cast iron facades. There are examples of full facades closer by in Chicago and Milwaukee. 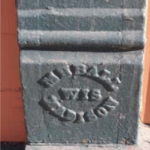 The name of the manufacturer appears at the base of many of the cast iron elements on the Argus building, home to the Argus Bar & Grill and Francisco’s Cantina.

This capital crowns the cast iron column at the entrance to the Capital Tap Haus on State Street. 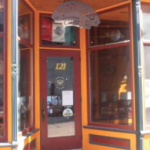 In Madison cast iron is seen in building details and ornamentation. Much that remains is found in columns on 19th century commercial buildings.

The Willett S. Main II Building at 107-109 State Street, which dates to 1894, has a cast iron column to the right of the entrance to the Capital Tap Haus. That may not be obvious unless you carry a magnet, which will cling to the column to confirm the presence of iron.

Finding the name of the manufacturer near the base of a column is another way to identify cast iron. Though not all castings carry a maker’s mark, it was easy enough to add the name to a mold. Good examples are found on the Argus Building at E. Main and S. Webster Streets. Built in 1844, the Argus was remodeled in 1891 when cast iron columns were added to the façade. Look to the bottom of the columns and you may see the embossed name of “M H Ball Madison Wis.” Madison H. Ball operated a foundry and machine works further east on Main Street.

Whether cast locally or shipped from afar, cast iron was an appealing material for Victorian-era buildings across America and the world.